Who is Christopher S. "Kit" Bond?

Christopher S. Bond is a sixth generation Missourian, born in St. Louis in 1939. He grew up in Mexico, Missouri. Bond graduated from Princeton University in 1960 and received his law degree from the University of Virginia, having graduated first in his class.

In 1969, Bond became an assistant attorney general under former U.S. Senator John Danforth. He was elected state auditor in 1970 and on January 8, 1973, he became the 47th governor of Missouri—the youngest governor the state has ever had.

Bond was re-elected to a second term as governor in 1980. Among his greatest accomplishments as governor was to take the Parents as Teachers program statewide. After his second successful term as governor, Bond continued his service to Missouri in 1986 in his newly won seat in the United States Senate. Missouri voters returned Bond to the U.S. Senate in 1992, 1998 and in 2004.

While serving in the U.S. Senate, Bond built a reputation as a statesman who advocated for a strong U.S. Military, improved care for our nation’s veterans and men and women in uniform and fought for economic security by protecting jobs from being driven abroad. Bond served on the Senate Select Intelligence Committee where he worked to give the Intelligence Community the tools to detect and disrupt planned terrorist attacks on America. 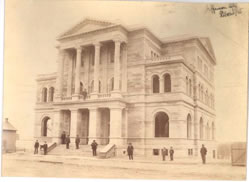 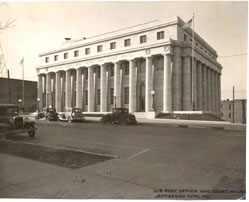 The U.S. District Court was then located in the U.S. Post Office which was dedicated in November 1934. The building’s appearance remains the same today. The Post Office continues to occupy the building.